Well, here we go again. It wasn’t long ago that I was inspired to write about my youth and struggles with depression. Now I find I am again surrounded by reasons to continue. In the first part of my journey, I really didn’t know what was going on, and certainly didn’t accept that I was suffering depression. I knew something was wrong, but the attitude of the time was to pretend you didn’t. The implication was that everyone else was OK, so admitting there was something wrong with you would only expose you as a fraud.

Taking up from where I had left off, realising that my mind was acting out dangerous thoughts subconsciously was a serious wake-up call. (See Darker Path Part 9.) Up until then, it was something that I could stuff down, ignore. To find myself acting out meant that I could no longer ignore it, but what could I do about it?

I admit, I was rather green, and somewhat simple-minded with regards many things. Maybe ignorant is a better term. I did realise one thing however. Trying to find fault with myself was simply leading me in circles. I had to change my perspective. I started by trying to find reasons for the actions of other people from their point of view.

Now I knew that I may not ever know the truth as to why someone had done the things that they had done, but I was convinced in myself that very few people ever did something simply out of spite. If I could come up with convincing reasons that would satisfy me, then I would have to be content with that. It was an interesting exploration for me, and had its advantages in my slowly developing me acting skills. Stepping into another’s metaphoric shoes, and trying to uncover the reasons one may have, was cathartic in the extreme, and an awakening one.

It was an interesting period of self-reflection, reviewing my actions, and the actions of others, as if I were someone else.

Something about being Unique

I used to have a serious problem with the word, or the association with being unique. I was frequently called unique, or some derivative of. Back then, it sounded akin to odd, or inexplicable. To me, it was a bad thing to be considered outside the norm, to be “special”, and I use the double quotations very specifically.

Even during my high-school years, I often had opinions that ran rather contrary to my peers, which earned my considerable scorn and ridicule. I recall a meeting at a Youth Group that I attended where a guest presenter impressed upon us the need to be happy ALL THE TIME. That was the goal. To avoid sadness, anger, and so forth. To me this sounded like all the years of being fake which even then I questioned.

I stood and asked what was wrong with being angry? While anger and aggressive were often expressed as had things, were their not good, and “happy” was to express anger? Can not someone be happily angry? Happily sad? I think one other person rose to my support as I was yelled at by others for being so stupid. While my wording may not have been clear, the intention I still believe in. To shut yourself of from all aspects of yourself, is just as, if not more, harmful than letting them run in the driver’s seat without supervision.

I wanted to say that you need to acknowledge all of what makes you a person, the dark and the light. We are not perfect, and to strive to be so is a road to depression. I just didn’t have the experience and vocabulary to express it. I was unique in my opinions, beliefs and self, which made me an outsider to those who could not understand.

Then new perspective came, in the form of a good friend formed during my years at uni. After several years of knowing each other, she had formed a relationship with another fellow student who was a part of our combined circle of friends. Near the end of her degree, she confessed a deep affection for me, which surprised me admittedly, but had been unable to express said affection. I felt the dread of life repeating itself as they continued, and I waiting for the word… but it never came. 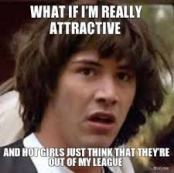 Instead, she told me that she had felt I was Untouchable. The first time someone had used such a term; Untouchable. She continued to say that she hadn’t felt good enough for me, that I was above her league, which was an alien concept to me. Me, be better than anyone else? Surely not. I couldn’t believe it, didn’t want to believe it, yet it felt a lot better to believe that I was untouchable than unique.

A simple conversation changed my perspective about a long time dislike. Mind you, it took me a few more years to get over my dislike of the word unique, mainly due to the memories and connotations it drew, but it was a start. I began to think about all those times someone called me unique, special, or different. I began to think that maybe they didn’t have the experience and vocab to express what they really wanted to say. Maybe they meant it as a compliment, but found it hard to compliment something which made them uncomfortable.

Even the dreaded “You’re nice, but…” which I got a lot, began to look a little different.

In the end, I had to accept that I was a little different. I had different thoughts and ways of dealing with things. I spoke differently to most of my friends, and found enjoyment in language and complex words. My mind worked more visually than logically. I was different, but it wasn’t a bad thing.

We’re all a little different.