I have been reflecting a lot recently, on a variety of things. One recurring theme through many of my personal blogs is the idea of freedom of belief, yet I haven’t really delved into what are my beliefs, or if I have any. It’s a dangerous field it seems, causing rifts and contention almost everywhere one looks. There are whole YouTube channels dedicated to the debunking of either side of the argument, and I have been watching a few lately.

According to my birth certificate, I was born under the Church of England, an Anglican branch of faith, yet religious education and enforcement was utterly absent in my childhood. My parents, as I recall, were either not big on the whole faithful devotion thing, or were non-believers. As such, I never had reason to question religion because it simply was not there. It was had a few Bible Study sessions at school, but it was never something that I considered more than metaphoric, or abstract. For much of my childhood, I was never given the motivation nor reasons to “have faith” as it were.

I grew up with electronics, math, mechanics, english, geography, and computers. Tangible and logical studies that encouraged investigation, study, research, and a rational that there is always something more to learn. My awareness of religion as a larger entity did not come until much later in my life.

I think my first true and most impacting experience with religion was a youth religious group that I was invited to by an old school friend. Now, I’d been to church once or twice before for things like funerals, weddings, and on behalf of a family member, but I had walked away from those experiences unchanged in my awareness. It was not something that was a part of my life. This experience was something else entirely.

The devotion, focus, and dare I say, mania that I saw was disturbing. To me, it felt dangerous, and I slipped out at the first chance I got. I felt that I had seen extreme form of religious fervour, but it left me feeling a little apprehensive about entering other places of worship for anything other than weddings and funerals.

Let me be clear, not all services that I have attended have been anywhere near as bad as that experience, but until that point in time, I was not aware how extreme it could be. I have since learned, as we all have, that extreme faith can have distressing consequences.

Prior to this first experience, religion to me was just something that some people believed in. After this, I knew it was something more to some people. As a result, I began to notice that I was a little unique among my friends.

Alone in the Faithless 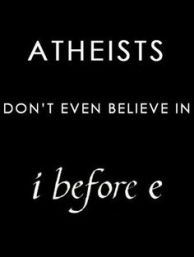 It became apparent that many of my friends had some degree of religious faith that gave them personal comfort and direction. Interestingly enough, I don’t think anyone tried to convert me, apart from that one scarring experience. Then again, I tended to lead a rather isolated life-style, maintaining a few good friends, so maybe there just wasn’t much opportunity.

In fact, I was, and still am, surprised to find a few good friends that I have either studied or worked with fo years reveal they had religious leanings. It was simply that religion didn’t enter into my personal life or consideration of others. I never judged people for their beliefs, because they were never relevant to me.

The same cannot be said for others however. Generally speaking, I have personally not experienced much negativity with people of faith, but I have witnessed plenty. I have gotten to know people before being aware of their ideals, which meant I struggled, and still do struggle, to understand why others have difficulties with this. It was sad that some of my friends missed the chance to know some wonderful people because of simple differences in ideology.

Who knows, I may lose some friends with my revelations above.

So I have been wondering recently, in terms of belief, what exactly am I? Reviewing the various definitions and arguments for faith, or lack of faith, you have a multitude of religious faiths, and then you have Atheists or Agnostics, and there is even some variation in that too.

I don’t believe in the existence of a God, of any faith, although I acknowledge that much of our modern society is founded on the belief in such things, dating back to the dawn of language. Gods have come and gone over the centuries, and the legacies of many linger today. Thursday is named for Thor, the god of Thunder for example.

And I am not hedging my bets, just in case, so I am not Agnostic. You either acknowledge the possibility of a God or gods, or you don’t. Agnostic it seems to me, is a non event.

As an Atheist, one can still believe in something having some sort of controlling power, or point of creation for humanity. It could be aliens that brought us into being, or a general supernatural power, or energy. Now I do entertain such ideas, yet I hold little worth in said ideas for the lacking or contradictory evidence, and this is a key point.

My world is based around what I can either demonstrate personally, or have seen enough evidence, research, and tested theoretical propositions to provide a structured basis for understanding. According to what I have read and seen, this makes me a Sceptical Atheist. While I have a few odd ideas about what could be, for example, a global consciousness of sorts, I am not committed to this idea, because I have insufficient proof, only anecdotal theories, to be mostly certain.

In very general terms, religion seems to take a concept and then configure the evidence to match the desired result, discarding what doesn’t support the ideal. Science usually starts with the evidence and works toward determining a concept.

The former would appear to have a rigid guide to what is acceptable. The latter seems to invite questioning, and uncertainty.

Explaining what you don’t understand as a higher power, unknowable by definition, all-powerful, stops further investigation. What would be the motivation to push further, expand, develop, and progress, when the perception was that there was nothing further to find? This is the argument that doesn’t work for me. I was brought up to question, to not be satisfied with what I do know.

I’d like to point out here that I realise not all religious people think in such black and white terms, and there are some who have been able to reconcile scientific endeavour with religous faith. I do use the extreme variations as examples here only.

Sometimes, in science, you have a theory before you have the evidence. Rather than accepting the theory, a scientist will try to prove the theory wrong in order to prove it right. This is done in a few ways, which boils down to either;

If you look at all the evidence, and cannot do either of the above, then the theory must be true. However, this assumes that you can become aware of all the possible ways of testing a theory at once. This may not be true.

Until recently, many criminal cases remained unsolvable, or falsely solved, due to the inability to test for certain things. The knowledge and technology did not exist at the time that would have helped solve the case to a near certainty. This is science. It evolves and adapts. Theories are tested and re-tested. It is never satisfied with the last discovery. It is never satisfied with an utlimate answer, although it is the pursuit of the ultimate answer that drives it forward.

It is, for me, this ever evolving cycle of discovery and learning that excites me. As a Sceptical Atheist, I see questions to be answered every where.

3 thoughts on “Born an Atheist”