It has been a while between blogs. To be honest, coming up with topic ideas is difficult for me, so here is another stream of consciousness diatribe from the chaotic grey matter of an aging Ham actor.

There are two things that can really unnerve me; public speaking and interviews. Within interviews, I include auditions, radio and TV interviews, as well as the common place job interviews. These things are almost certain to start the butterflies and knots in my stomach, and even give me the sweats. It doesn’t help much when you get an audition that is in less than 48 hours, and one that comes with a question mark. I think I may need to explain that a little more.

I am a freelance actor (at this time) which means I have not signed up with an agent and tend to try and find my own work. It is harder as you are often without the extensive network that an agent may have access. None-the-less, through various connections and specific grape vines, you often can find out about various opportunities. One such grape vine is a web site called StarNow.

This is a brilliant web concept providing actors, photographers, crew, models and other creative types the ability to promote themselves independently, and to hear about possible opportunities. It is not the place to come if you are looking for just paid Professional work, although occasionally you do see professional opportunities being advertised. Most of the material is non-paid, profit share, or deferred payment arrangements. For those looking to build experience, and develop a collection of work samples, it can be a very useful service. It is occasionally used by more unscrupulous types, and these guys turn up everywhere anyway, so you often have to exercise a degree of caution when applying for anything, especially when they offer some large payments options, or incredible promises.

So when I saw an email alert showing the latest casting calls that matched my rather general search criteria, which included an opening offering a rather large fee, I was dubious and curious at the same time. It seemed a little too good to be true. Rather than brand the post as a hoax and leave it be, I decided to do a little research. The post had some basic information related to the organisation doing the casting, so I decided to look them up. Very easily I found a web page which displayed a rather extensive portfolio of work, and seemed to indicate a degree of professionalism. I supposed that the StarNow posting could have been placed by an impostor, so I posted an email to the contact address on the website asking about the StarNow posting. It was replied to that evening with a “confirmation” that the posting was official.

At this point, everything seemed very legit, and yet I still felt I should approach cautiously. However, there was really only one thing left to do; take the audition. Like a job interview, an audition is not only an opportunity to get a job. It is a chance to see what it is all about, get a feel for what is going on. Which meant, facing my fear of auditions.

It may seem a little funny that an actor’s biggest fears are associated with his biggest passions, yet that is the very reason these things are my biggest fear. A job interview, an audition, or speaking in a public forum; it’s about you. You are selling yourself for something that is important to you, and if you don’t do it, you won’t get it, or with a less than flattering reputation. I’m sure this is the same for many others. Some of our biggest fears are connected to our dreams and sense of identity. For an actor, being able to market yourself, socialise, and take on interviews, is a rather important part of their career. If you don’t do it, you may not miss every opportunity, but it will be harder to get what you want.

Back to the audition, there were two things I wanted; to know a bit more about the job and the casting company, and to have a chance at getting the gig if it turned out to be legit. Motivation enough to simply take the chance.

So there I was, walking streets with my wife, doing a little distraction shopping, yet feeling the churning inside. In moments like these, I am glad of my years of Ju-Jitsu training. Not only did I learn about self-defence and putting people in painful restraining holds, I also learnt about emotional control. Mind you, I didn’t really master that until many years after leaving training… The fear I felt bubbling inside was an indication that what I was about to do had some significance to it. Like a warning beacon. I had no idea what the audition might be for, what was expected, and had nothing prepared, although I carry around a couple of monologues I can drag out at a moments notice, from memory. I was going in blind so to speak, which doesn’t do much ease the nerves.

After leaving the wife, who continued with some book searching, I went to the audition, and without going into much detail, found more reason to believe the authenticity of the job, and also managed to do an audition that I was actually quite happy with. Now it is just a matter of time to see if I am the right choice for the part, and that is another issue. I also found no reason for my fears. The session was very casual, friendly and I had a good old chat with the manager/producer. Fears unrealised.

While we are talking about fear (Well, I am talking about fear, not we necessarily), I have been struggling with another fear; the fear of change. I mentioned in my last blog post about an opportunity too good to refuse. Well, I have been in a partial transition over the past few weeks, taking a few days of from my stable job in order to get some experience in the new career. I have two or three weeks left before I make a full transition, and I have to say that nerves are setting in. Again, this change is a rather big deal to me, and I don’t want to… muck it up. While my rational mind likes to remind me that I am making a profitable move, both financially and emotionally, my emotional mind seems to want to contemplate the worst case scenarios.

When I think about it, what it is I really fear about this move, it dawned on me that my fear was about losing the opportunity somehow. Not through my actions or abilities, but through external events beyond my control. The rational truth is that these events could affect me even in a stable job. The concerns are irrational, as fears often are, and there would be nothing I could do to stop them if they did happen. Once upon a time, these irrational fears would have stopped me dead. Rather than risk the rather slim chance that one of these, shall we say, deal-breaker fears will occur, you stop, and do nothing.

This is the problem with fears. Too much import is put into the fear, and not into the why behind the fear. Hmmm, I think I did another blog about the Why. By focussing on the fear, we freeze, panic, get emotional, and stop thinking, and when we then combine that concept that our worst fears are often associated with a biggest desires, then it is a wonder people achieve anything. 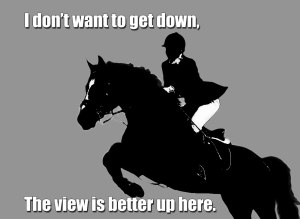 Well I have been ready to move on for a while and have bided my time waiting, searching, and trying to create an opportunity to do just that. Now I have that opportunity, and I find my fears have come after the choice has been made, rather than before. As a younger man, I may have conceded defeat and ran back to the “safety” of the familiar and stayed put. Sadly, I’ve learnt too much and that is no longer an option. So I am going to get up on my high horse and stick to my guns. Time for change has past, and I need to take full advantage of the opportunities that are coming my way. I can no longer allow fears to redirect my pursuit, yet I don’t want to ignore them completely.

So I redefine fear into something I can use. As I said above, fear is often associated with desires (or so I find anyway) and importance. When reviewed with moderation, a fear is your insecurities just asking you to be careful. Don’t get too carried away with the excitement, or lost in the illusions of dreams. Just remember to stop every now and then and look around, get your bearings, and ensure you are still on track.

I am not immune to fear, and I doubt many people are. I just need to acknowledge it, and do it anyway.