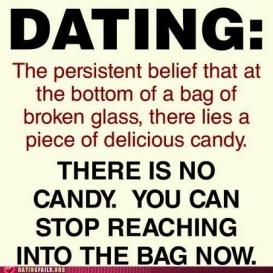 Disclaimer; These are my personal thoughts on dating.

Dating in the modern world, to me at least, seems to be dangerous and incredibly intimidating to most people. It is awash with Spam bots, fake personas, the desperate, and narcissistic egos. Not to mention the present day perception that you can only date people you haven’t met yet.

Modern dating consists of meeting new people through either dating webpages or apps, or the still persisting random pickup-line at a bar, going from zero to “are you the one” in a single step. Another victim of the instant gratification society we live in?

To my mind, this style of meeting people really only works for those looking for casual, throw-away connections, or those looking to feed their own ego in some way. Yet it seems to be the social norm to dating these days. It just seems to be very risky to me. Why do it? Why put yourself in such a sensitive and exposed position?

There are even networks where existing members get to vote on if a new person (generally female) can join. Talk about a meat market. We are fighting to be recognised as people out in public as opposed to objectified images, yet willing put ourselves out there as objects to be bid on. What ever happened to the earlier steps? The ACTUAL getting to know each other steps?

The whole concept of meeting that one right person, who makes you swoon within seconds, has been popularised and romanticised by fiction and media in general. Not saying it doesn’t happen, but like perfection, it just isn’t entirely realistic.

Yet, some of the best romance stories have been about the gradual building of a friendship that becomes a partnership. “You’ve Got Mail” being an interesting view in terms of developing separate connections with a real-life and an on-line persona who just happen to be the same person.

It seems to me that the whole concept of socialising has been removed from the path to finding a partner completely, as I watch social media post after post complaining about the difficulties of dating, the types of people you meet, the pressure and sense of exposure one goes through. The expectations are high and so is the risk.

It’s taking a massive leap and expecting to find someone you can trust without knowing a thing about them. “But dating is about getting to know someone?” No, it’s not. Dating is about getting to know that this is a person you want to get closer with, and by closer, invest in them your trust, love, body, etc. You can get to know someone by sharing a drink with them and a few friends at a party, or social club, or pub, which is far less intimidating.

If you want to get to know people, see how they act around other people: those they know, and those they don’t. Use your existing network of friends to build bigger circles of friends, because your friends will introduce you to people they know, and the cycle repeats. You are more likely to meet someone with similar interests to you because you are moving within existing connections based on familiarity. You also can observe their interactions with others to get an insight into their ideologies and attitudes. And with friends around, you aren’t so exposed nor expected to perform. You can quietly observe, or participate at your own pace.

One major advantage socialising has over dating, apart from the increased possibilities, is safety. You have friends nearby who can support you, hide you, or call bullshit when you miss it. They will see things you don’t. We are stronger in numbers. 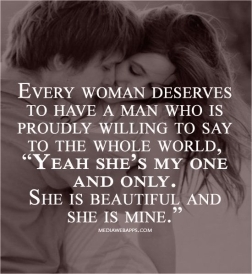 It all seems to focus on this odd concept of finding the one. The one I deserve. The one who will see me for who I am. The one who will accept me for all my faults. The one who can tolerate me at my worst, and respect me at my best. There is this general sense that there will be one person out there who will be able to make us whole.

I’ll be very honest here. Anyone whom has read through my other posts will know that I have gone through some dark periods. Not as dark as some perhaps, but dark enough to leave me feeling worthless, broken, and unlovable. For years I struggled with the feeling that I was not worthy of love. I sabotaged my own relationships perhaps with this thought. When I met my first long-term relationship, I was in a slightly different place. I wanted to fix someone. I wanted to feel I could do something for someone else because I needed to feel worthy of something.

The truth is, while this desire ensured I didn’t get cold feet as soon as I had done before, and may have left my partner feeling like someone wanted them, my desire to fix was one of the things that formed a wedge between us. As I tried harder, she pushed back harder. I was naive but I’ve had a lot of time to reflect.

There is really no-one out there that can make you whole. Many people may try. Many people can offer their guidence and support, but no-one will fix you. Not unless you take on their advice and fix yourself.

So if you can’t see you for who you are, accept you for all your faults, tolerate you at your worst and respect yourself at your best, and therefore be undeserving of yourself, then how can you expect to deserve this from anyone else?